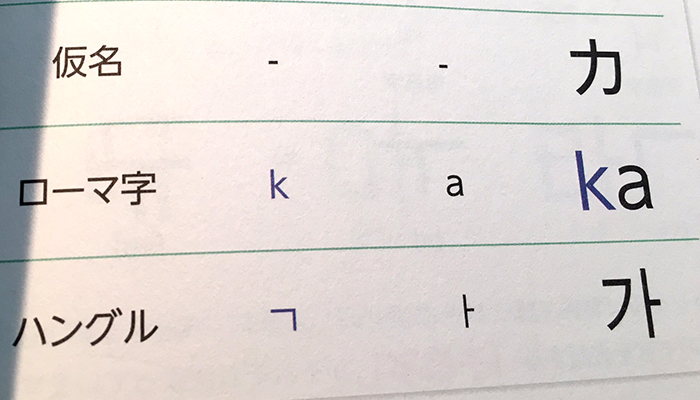 The writing exercise.
After learning for three days Hangul composed in a syllabic character, Hichol Cho started to divide characters into their smallest units: consonant and vowels.
During the last days, while trying to memorise the shapes, I already tried to see the single elements of consonant and vowel in each syllabic character. By this method, I tried to find my way to recognise shapes. Now I ask myself whether this personal approach is based on my background of using Latin letters as my main writing system. (I use Japanese rather occasionally.) And this book and it’s methods of teaching are designed to serve Japanese readers.
A general question pops up in my mind: would a German or English study book treat this differently, by starting with the consonants and from there going to build syllables?
Something I will check today.
Now to the subject of today’s exercise: the nasal consonants ㄴn and ㅁ m, and the liquid consonant (in Japanese 流音) ㄹ r.  After yesterdays confusion based on the additional vowels, these three consonants made me happy again. I connected them to the 8 basic vowels and all seem to click. To use the writing hand – repeating each shape 6 times – to learn a character, is a way I learned to write Japanese as a kid. And now, to do this again brings me joy. After enjoying the illusion to understand the system for almost 12 pages, a table including all syllabic characters I learned so far, appeared at the end of the chapter. This table comes with an invitation to write this table in my own notebook. I obey and copied it (of course by hand). While the first part with the basic vowels were an easy game, the second part with the double vowels challenged me a lot. I can’t imagine the phonetic and interesting enough, to write them is a struggle too.
It seems that I need to find access to the pronunciation. A task for tomorrow? The new vowels from yesterday made the end of the exercise difficult. Not only in Cantonese, also in Korean, I am confused about the phonetics.

Reading of the day.
During the writing exercise I wondered about the question of how a German author – or an author with an alphabetic/Latin letter based background – would introduce Hangul: as a syllabic or an alphabetic system.
I chose to read Christa Dürscheid, who published a book about the linguistic of writing. Dürscheid opens a chapter with the question ”Hangul: an alphabetic script?”. This seems to be the perfect choice to my question. This image was published in Dürscheids and in Coulmas books. It shows how consonants and vowels join in syllables. In this table the 0 row comes as row number 8. In the Japanese book this came first at the very beginning. Cultural differences?

The summary:
The smallest units of Hangul are consonants. However the basic units are syllables. The initial point and the uniqueness that makes Hangul an original and an independent concept of writing, is the knowledge that each syllable is build on single phonetic segments: an initial, a middle and a final sound. This is reflected in the composition of each Hangul syllabic character. In comparison, a Japanese Kana (character for a syllable) is the smallest unit and can’t be deconstructed.
Dürscheid finally names Hangul an “alphabetosyllabische Schrift” – a system in which vowels and consonants are the smallest elements, however the syllabic character is the main unit of operation.
Dürscheid quotes Coulmas:

“What follows is that a typological classification of a writing system should not look for the smallest linguistic entity it presents, but for its principal unit of operation.« (Coulmas, 1996)

To recap for myself: the syllables are the main characters, which can be further divided into consonants and vowels. Although the systems work different, but I am tempted to make a comparison to Latin letter based writing, in which we recognise words and not single letters. And in the world of Hanzi/Kanji, we see a character and not the single radicals.
Reference:
Dürscheid, Christa: Einführung in die Schriftlinguistik. Vandenhoeck & Ruprecht, 2012.
HangulKorean