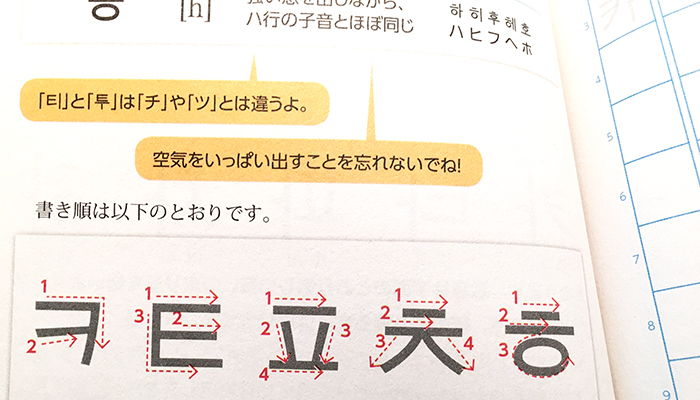 The writing exercise.
The second week starts by an extension of what I learned last week, followed by exercises of writing to memorise the characters.
I am quite thankful, not to learn completely new shapes today, as I think I need to be able to memorise the elemental shapes first. (At the same time, I wonder where the limitation of variations for simple shapes could be.)
Today’s character set clearly showed me the focus of Hangul in transcribing the phonetics of the spoken words. In my Japanese book, the todays chapter is called 激音, a strong/super sound. Hichol Cho describes it figuratively as:

つばが飛ぶほど元気よく, pronounce it so lively, that you almost spit. Spitting and beard are welcome.

In a more delicate way, she suggests to hold a tissue in front of the mouth and to see it moves while pronouncing the new characters.
Another very pictorial memory aid is the comparison of the additional stroke with a beard to indicate the stronger phonetic. The five characters grow a beard and starts to speak so lively and strongly that they spit. (My version…)
Here is the overview of the additional characters and how they changed from the original ones.
ㄱ /k ～ g/  >  ㅋ /kʰ/
ㄷ /t ～ d/  >  ㅌ /tʰ/
ㅂ /p ～ b/ >  ㅍ /pʰ/
ㅈ /ts ～ dz/  >  ㅊ /ʨʰ/
ㅇ/silent  >  ㅎ /h ～ ç/ Correct pronunciation is important: to make a difference between “rain” and “blood”.

To me this lesson was interesting, as I compare Korean to Japanese and German. Both languages (Japanese and German) are relatively flat in their pronunciation. Seeing the transcription of the phonetics in Katakana for 비 as ピ and 피 as ピ, there is no difference on the level of writing. In fact one leading argument for Japanese to keep using Kanji instead of solely writing in Hiragana or Katakana is the problem about homophones. Kanji help even in an oral conversation to clarify the choice of the correct word. While Kanji communicate the intended meaning by their semantic layer, Hangul do this by the alphabetic radicals* transcribing the phonetic.
*) I feel tempted to call the consonants and vowel shapes “alphabetic radical” in reference to the single radicals which construct a Kanji. In both cases, Hangul and Kanji, the radicals are the single elements that compose a character.
Reading of the day.
My short comparison of Korean to Japanese few lines ago, is a topic (in a broader sense) that came up in my reference book as well.
The linguist Harald Haarmann opens his chapter on Korean script with the hypothesis that Hangul is a unique script invention. A script that does not have any relation to another existing script, regarding the cultural condition for it’s emergence, as well as for the structure of the script. The Korean language differs strongly from Chinese and Japanese – to transcribe the Korean language correctly, it needed a tailor-made system.
Additionally Korean skip the step of creating a phonographic syllabic script. {I am not too sure about this point as I read that Korean used a simplified version of Kanji to transcribe phonetics, before the invention of Hangul.}
Only in one regard, Haarmann sees a link to Kanji: the formation of the alphabetic radicals in a imaginative square to form a syllabic character.
This short chapter let me wonder. As Hangul was developed in the 15th Century, I am sure that King Sejong and the scholars who worked with him on this project studied existing scripts. They mastered Chinese for sure, they also must have known about Japanese Kana and maybe even about the Latin Alphabet, if not also about other writing systems of the world. According to Haarmann, Hangul was developed within the short period of time between 1443 and 1446. To develop such an elaborate system, I think the study of other scripts must have been inevitable.
Anyone, who knows more about it?
Reference:
Haarmann, Harald: History of writing. [Universalgeschichte der Schrift]. Campus, Frankfurt/Main, New York, 1991, 355–360.
HangulKorean