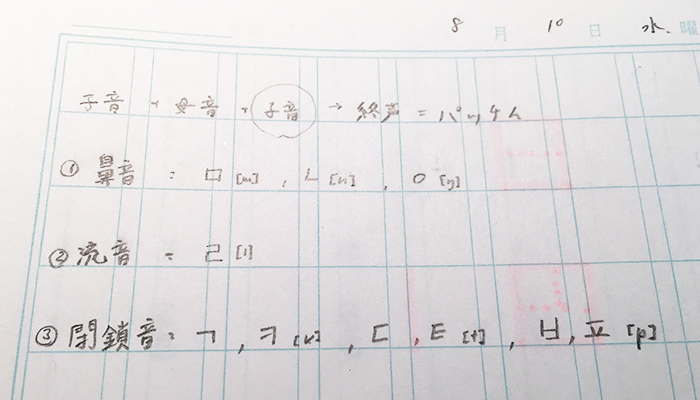 The writing exercise.
Probably “I love you” is the first sentence to learn (after knowing one swear word) in a new language. And I learned it today on my 8th day with Hangul. After the first swear word, now “I love you”.

Despite this, I spend more than two hours by finishing the writing exercise. From the point of view of a student this was too much and I didn’t even count in the time I needed for reflections. While I strongly believed in learning the systematics of Hangul in the past 7 days, today I felt like learning vocabularies. Based on the shifted time distribution, I will only write about what I came across during the writing exercise. One of three pages filled by vocabularies, that needed to be written five times…

The main topic of the lesson was patchim – affix or a final consonant within the syllabic block. Once again, I feel the discussion on Hangul as a syllabic or alphabetical system opens up… For Japanese there is solely one Kana that does not end on a vowel, this is the silent n: ん. In Korean it is not limited. The possibility that the last alphabetic radical within the syllabic can be a consonant leads to another interesting feature that brings the system closer to the alphabetic idea, as this consonant will/can connect to the following syllable. Hangul is such a hybrid! One syllable ending on a patchim connects to a next vowel.

Another finding, one example for the hidden trap of homophones: Homophones, at least by the Latin letter transcription.

To the sketches of Hangul structures, I have shown yesterday, I need to add one more: One more principle for the structure of alphabetic radical in a syllabic block.

And last but not least – I found three words where I see a great similarity in pronunciation to Japanese words. I guess those are loanwords from Chinese which made it into Japanese and Korean in a similar way. CJK – from another perspective.