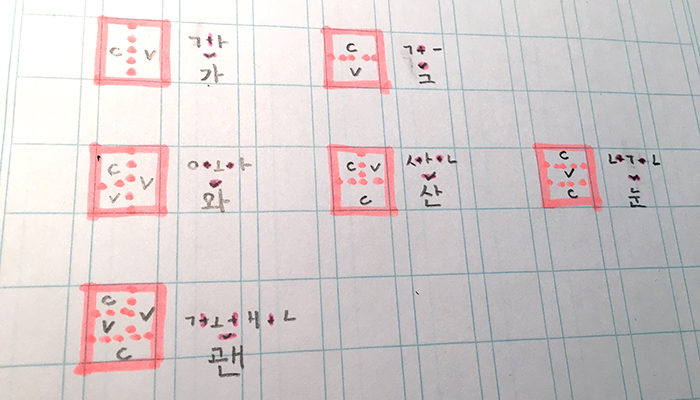 The writing exercise.
Today was lesson two of the chapter “phonetics that I do not know from languages I speak”. I learned about 濃音 deep/dark sounds. The description given in my study book rather confused me as it says phonetics pronounced with a deep and dark voice in which not much exhaling (breath) is involved. It is difficult to imagine such a sound, so I used the website http://sononi.com/kc/jp/hatsuon/0050shiin_gekion.html to listen to the samples. My personal impression is, that the sound starts with a rather suppressed voice, almost as if you hold the voice before letting it out.
The characters representing these phonetics are ㄲ ㄸ ㅃ ㅆ ㅉ, all variants by doubling the consonants ㄱ ㄷ ㅂ ㅅ ㅈ which I learned before. This gives me the impression that I learned the basic elements within the first five days and since then, it is a matter of combining and organising of those elements into different alliances. There are 14 consonants and 10 vowels, in total 24 alphabetical radicals that build the base to be combined in different ways to more than 2000 syllabic characters. I experience Hangul truly as an scientific and systematic concept of writing. Two of the same kind, create a new variation of phonetic.

However the phonetics that the variants by doubling represent are not completely surprising, nor new to me. In fact typing Japanese by using Latin alphabet as an input method uses a similar method. To type the small ッ in Japanese to transcribe a short sound as タッ (ta) or カッ (ka), you need to consider the following phonetic (third Katakana). In case you want to write タッタ, you will type tatta. For カッタ, you will type katta. (This transcription is also applicable to latinised writing.) While in Japanese the small ッis part of the preceding character, in Hangul it it is reversed. So maybe my earlier self-explanation of suppressed voice is not too bad?
After this lesson I start to wonder, how do onomatopoeia in Korean sound like? A research topic for tomorrow.
Other than that, I see faces in some of the characters. What do you see? I can’t help. looking at these characters, I only see faces.

Reading of the day.
Yesterday, I have described the uniqueness of Hangul. Today I want to show one aspect in which I see a similarity to the structure of Chinese characters. I read earlier last week that Hangul were first designed to be written along with Chinese characters. This was given as an objective for the squarish outershape of Korean characters. An even stronger reference to Chinese characters is the use and arrangement of the single consonants and vowels within a square. This became very comprehensible while I read the chapter on Hangul in “Encyclopedia of the Scripts of the World”, edited by Motoyasu Maeda. I made a simplified sketch (using c for consonant and v for vowel) based on the figure in the book, which demonstrate well the structure based reference of Hangul to Chinese characters. (Feature image of the post.)
Instead of arranging the alphabetic elements in a line as common for Latin letters, the basic alphabetic elements are composed to become a complex syllabic character – almost like a Kanji with missing semantic layer, and instead it can be spelled out. I guess there are also further links to other writing systems.
Today I tend to say Hangul is a sophisticated script, summarising the knowledge and positive aspects of other scripts.
Reference:
Maeda Motoyasu: Encyclopedia of the Scripts of the World. [前田求恭 (世界の文字研究会):世界の文字の図典] Yoshikawa Ko Bunkan, Tokyo, 2011
HangulKorean