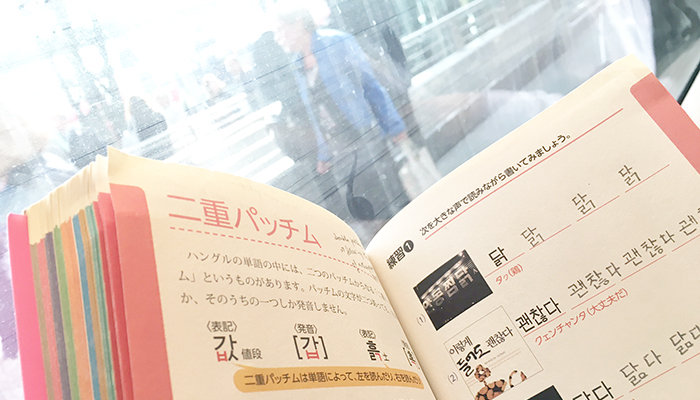 The writing exercise.
Today was the day of my last practice based lesson and the last chapter of my study book. It was also the first lesson I have done in public – on a train from Düsseldorf to Frankfurt. I started the last chapter shortly after leaving Düsseldorf main station and finished it after arriving in Cologne. Yesterday, it was double today only half of the designated time for a chapter.
Topic of today was the second session of patchim and at the same time it was a confirmation to my thoughts of yesterday: from this level on, it seems to me that deepen the knowledge of Hangul is only possible in alliance with the study of the language. I would need the knowledge about the structure and grammar of Korean and a repertoire of vocabularies to see and experience the Hangul characters in action. The phonetic transcription by Katakana turn out to mislead me especially in the last chapter and this is a proof to me how much the characters are designed for Korean phonetics.
Reading of the day.
The reading on the train “Visible Speech” by De Francis gave me some answers and at the same time it opened up a new discussion.
The answer first. De Francis elaborates how the knowledge about Chinese characters inspired the syllabic principle and  influenced the graphic construction of the syllabic blocks of Hangul. According De Francis the knowledge about alphabetic writing came from Mongolian and Indian. To develop a scientific and systematic writing system in a defined and relatively short period, only works if it is build on a solid research and analysis of existing systems.
Now to the new insight.
De Francis disagree to the classification of Hangul as an alphabet-syllabic hybrid. Compared to Japanese where syllables can’t be broken down into smaller phonemic components, this is possible for Korean. Hangul characters are syllabic bundles grouped together by phonemes. Based on this De Francis describes Hangul as a morphemic system of writing. A morpheme is the smallest meaning unit within a word. Further De Francis suggest the term morphophonemic to describe Hangul. One supportive argument is the way how Korean learn Hangul characters – not as single alphabetic elements that build one block, but as individual characters.
Here I find myself at the beginning of this post: to understand the writing system, to learn the language becomes inevitable.
Reference:
De Francis, John: Visible Speech. University of Hawaii Press, Honolulu, 1989, 186–200
HangulKorean